Home Who We Are Tom Lantos

“But Tom always believed that regardless of our political party, we were fundamentally on the same side. We were for freedom. We were for democracy. And that through debate, sometimes contested, we would keep working toward what our founders set as the goal, a more perfect union.” – Former Secretary of State Hillary Clinton’s remarks at the Inauguration of The Tom Lantos Institute. 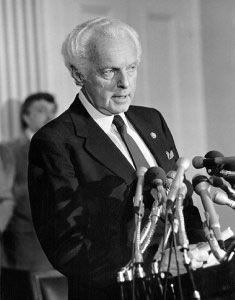 Tom Lantos will always be remembered as a leading champion of human rights. He committed his life to promoting human rights through raising awareness and respect for human rights around the world. His work will continue to live on through the individuals and nations that were touched by him.

Tom Lantos was born in Budapest, Hungary, where as a teenager he was sent to a forced labor camp by the German Nazi occupant military. He escaped the labor camp and received refuge with an aunt who lived in a safe house operated by Raoul Wallenberg, the Swedish diplomat who used his official status and visa-issuing powers to save thousands of Hungarian Jews.  Right away, Tom Lantos joined the anti-Nazi resistance. In 1945, after the Russians liberated Budapest, Tom Lantos was unable to locate his mother and family members, coming to the realization that they all had perished in the Holocaust.

In 1947, Tom Lantos went to the United States to study on a Hillel Foundation Scholarship. He earned his B.A. in 1949 and M.A. in economics in 1950, both from the University of Washington in Seattle. He received a Ph.D. in economics from the University of California, Berkeley. He began his public servant career as a foreign policy commentator on television and as a senior advisor to several U.S. Senators. In 1980, he was elected to the United States House of Representatives from the 12th District of California, becoming the only congressmen since to be a Holocaust survivor.  In 1983, he co-founded the Congressional Human Rights Caucus with then-Congressman John Edward Porter of Illinois. After serving 27 years on United States House Committee of Foreign Affairs, Tom Lantos was appointed Chairman of the Committee during the 110th Congress.

During his time in the United States Congress, Tom Lantos brought to light many human right violations in the world. He brought awareness to the violence against women, killings in Darfur and the Congo, and persecution of religious minorities. He also brought attention to the growing HIV/AIDS epidemic. He was a strong opponent of the persecution of Tibetans, the Kurds, the Burmese and indigenous people on every continent.