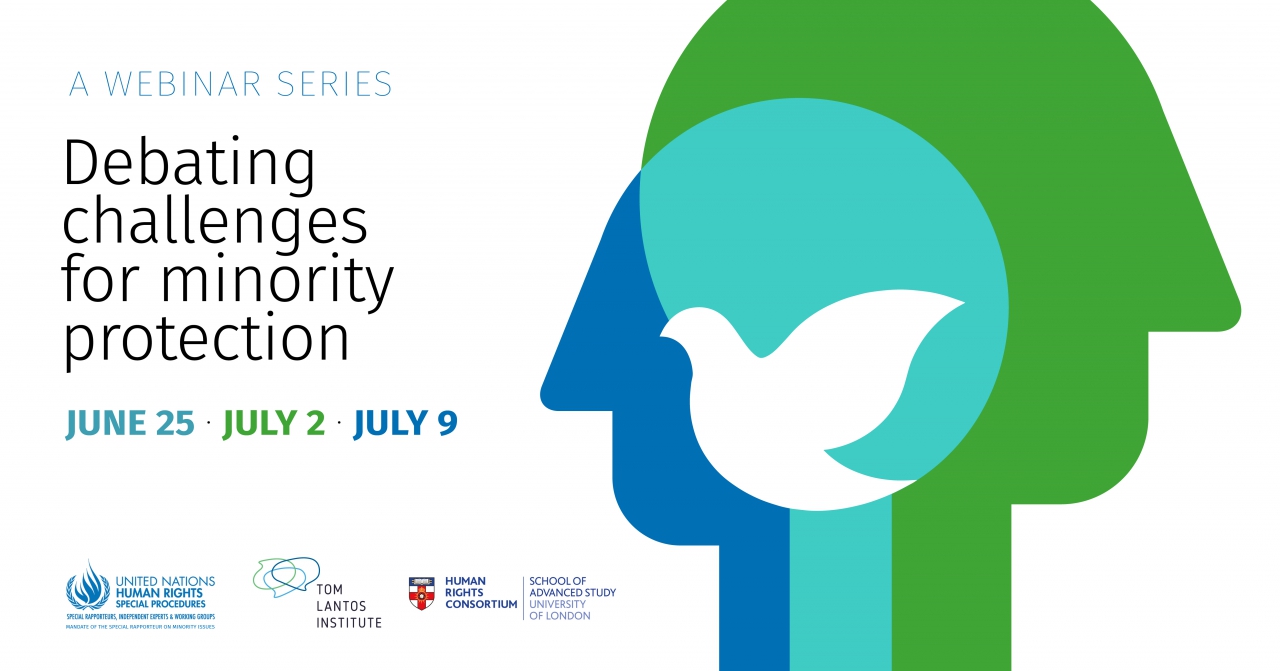 The protection of minority rights is central to the realisation of the three pillars of the United Nations: Human Rights, Peace and Security, and Development. Across the globe, there are long-standing situations of minority rights violations, and more recent crisis and challenges that result from these injustices. The UN has created two principal mechanisms with a specific mandate to review these situations: the Special Rapporteur on minority issues and the UN Forum on Minority Issues. This webinar series aims to support the work of both of these mechanisms by debating recent and future thematic priorities and discussing relevant country case studies.

The Special Rapporteur on minority issues (SRMI), Dr Fernand de Varennes, was appointed by the UN Human Rights Council on 26 June 2017. The mandate of the SRMI includes promotion of the implementation of the Declaration on the Rights of Persons Belonging to National or Ethnic, Religious and Linguistic Minorities (UNDM); examining and overcoming obstacles to the full and effective realization of the UNDM; identifying best practices and technical cooperation with the Office of the High Commissioner, at the request of Governments. In carrying out his mandate the SRMI issues communications to States; submits annual reports to the Human Rights Council and General Assembly and undertakes country visits at the invitation of Governments. In addition, the SRMI guides the work of the UN Forum on Minority Issues (UNFMI).

The UNFMI is the UN’s only global platform for shared discussion between representatives of minority groups and states on pressing issues such as economic and social inclusion, security and justice. Each annual session in November is attended by over 600 participants, including governments, experts and civil society organisations (CSOs) from around the world. More information on the Forum, including a database of civil society and government statements, can be found at www.minorityforum.info, a resource created by TLI and the HRC, University of London and at the website of the UN Office of the High Commissioner for Human Rights: UN Forum on Minority Issues database.

As we approach the half way point of the year and the Special Rapporteur’s current term, this webinar series will contemplate his thematic priorities, reflecting on the past and present issues as well as looking towards the future.

Following an introduction by the moderator for each webinar, each speaker will focus on their specific national context, providing details on 3 major challenges and how these might be addressed by international organisations. Each speaker will be allotted 10 minutes.

The SRMI will follow these responses with his reflections on the issues highlighted and provide observations on the theme.

The remainder of the webinar, will address questions from the audience. These can be submitted in advance to   or during the webinar via the chat function to the moderators. All questions submitted, even if not responded to, will be collated and shared with the Special Rapporteur’s office and those that are relevant to the mandate will be shared with the office of the OSCE High Commissioner on National Minorities.

Webinar 1: Education, language and the human rights of minorities

The thematic focus of both the 12th Session of the UN Forum on Minority Issues and the regional forums held in 2019 was the topic of education, language and the human rights of minorities. The objective of these forums was to provide insights for the development of a set of recommendations to inform and strengthen the implementation of international human rights in relation to education in, and teaching of, minority languages. One year after the forum, this webinar will reflect on subsequent challenges and issues that need to be addressed.

More information and documentation in relation to the 2019 regional forums can be found here.

Webinar 2: The critical challenges of tackling hate speech, xenophobic rhetoric and incitement to hatred against minorities

Hate speech, xenophobic rhetoric and incitement to hatred against minorities, including on social media, is one of the thematic priorities chosen by the Special Rapporteur on minority issues. This also reflects initiatives on hate speech spearheaded by the UN Secretary General. At the 2020 regional forums and UN Forum on Minority Issues, this significant and timely topic will be discussed to highlight the significance of the promotion and protection of the human rights of minorities in combatting these practices. This webinar will identify the issues, patterns, and impacts of ‘hate speech’ and explore appropriate responses.

Webinar 3: The interrelationship between conflicts: minority rights and the promotion of inclusiveness and stability

Most violent conflicts today are intrastate and involve minorities. While each situation is unique and complex, there is one common thread: grievances around claims of inequality, exclusion, and feelings of injustice. According to a 2017 joint UN-World Bank study, these are prime contexts for conflicts, since grievances ‘may become politicized and risk tipping into violence.’ Addressing the human rights concerns of minorities such as the issue of discrimination is central to targeting the root causes of ‘inequality, exclusion and feelings of injustice’ in order to strengthen inclusiveness and stability, and contribute to the prevention of conflicts. This seminar will examine three country case studies of major conflicts affecting minorities, alongside reflections from the OSCE High Commissioner on National Minorities, whose mandate focuses on conflict prevention and resolution.